How do Chickens Lay Eggs?

The process of egg laying starts in the chicken’s eye. Sunlight enters the eye and activates a photosensitive gland, the pineal gland, located right next to the eye. This in turn triggers a process that releases an egg, or oocyte, from the chicken’s ovary. This light sensitivity is one of the reasons that hens lay less eggs in winter. 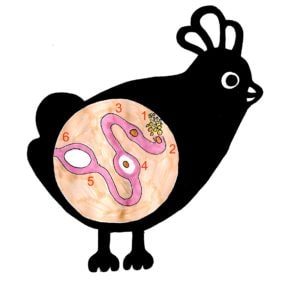 Hens are born with two ovaries, but one of them stops working straight after the chick has been born. It is believed that this is to save on both energy and weight, and as long as the other ovary is working, one is plenty!

The ovary contains thousands of potential eggs, or ovum as they are also known. If you were to open up a chicken, these undeveloped ova can be seen at the start of the spine. When the chicken is old enough to start laying, some of these ova begin to mature into what is later becoming the yolk. At this stage the ova are separated and contained within their own follicles, but when one is ready to move on it releases its follicle and moves out of the ovary and down the reproductive tract, the oviduct.

This process, ovulation, occurs approximately every 25 hours, and normally starts again about an hour after the previous egg has been laid.

Via the infundibulum the yolk enters the oviduct, and it is here that the egg is fertilised if a rooster has courted your hen. You might have noticed that egg yolks have a small, white spot on them. This is the blastodisc, the single female cell that together with the sperm will develop into an embryo through cell division.

The journey of the egg is however exactly the same regardless of whether it’s been fertilised or not. The yolk travels through the magnum and isthmus parts of the oviduct, and this is where the egg white (also called the albumen) is created. It works as a thin membrane around the yolk that holds everything together. The chalazae, two spiral bands of tissue, makes sure that the yolk is evenly positioned within the albumen, and the whole thing starts looking like an egg, although missing a quite crucial part – the shell!

The egg receives its shell in the uterus, thanks to the shell gland. It takes roughly 20 hours to produce the shell, so this is the most time consuming part of the process. Before the egg moves on for the last time, the outermost layer, known as the bloom or cuticle, is formed to create a anti-microbial layer.  When the egg is ready, the shell gland pushed the egg out of the oviduct and in to the cloaca, the part where the reproductive and excretory tracts meet.

« Does your cat affect your sleep?
Why your Rescue Cat could benefit from the Maya Nook Cat House »