Can Rabbits and Guinea Pigs Live Together?

One of the most commonly asked questions from pet parents of smaller breeds of animals is whether or not rabbits and guinea pigs can live together. They are both small, cute and cuddly, live in hutches (or super stylish Eglu Go Rabbit Hutch!) and like vegetables but that is pretty much where the similarities end. 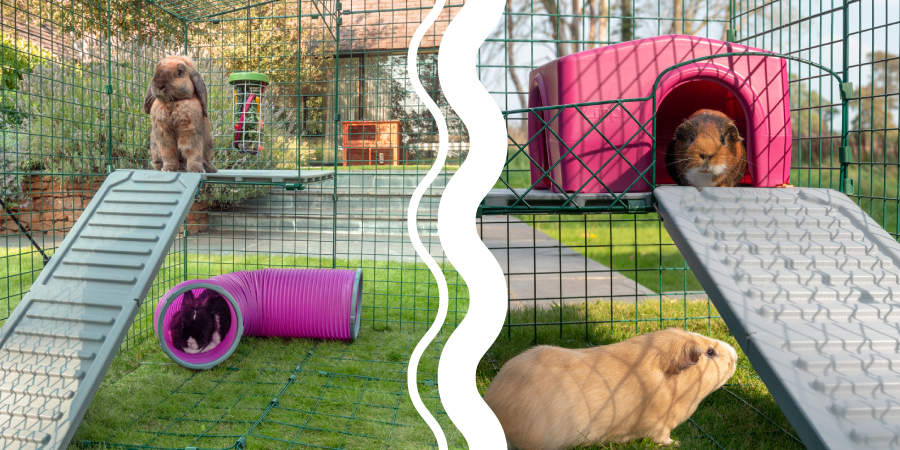 It used to be fairly standard practice for Guineas and Bunnies to live together, this was because neutering smaller animals wasn’t seen as a safe option. Things have most definitely changed since then and this is no longer a concern. The other reason behind this cohabitation is that the saying “breeding like rabbits” is very true! It was thought that by keeping guinea pigs and rabbits together it would prevent mass breeding.

A rabbit’s reproductive cycle is pretty fast, almost immediately after giving birth they can conceive again, and even though the average litter size is 5, it could be even higher! The largest recorded rabbit litter is 24, born to two New Zealand rabbits!
So, if a plethora of bunnies is not for you then your option would have been to let them share the living space with a guinea pig. It’s company after all, right? Wrong, in an ideal world, it would be perfect, however, it is not always meant to be.

Rabbits and Guinea Pigs are not really recommended to share their living quarters. Here, we look into the reasons behind why this seemingly suitable match made in heaven and lifelong friendship, won’t always be ideal.

They have different diets

Many consider these small pets to be similar in many ways, however, their dietary needs are quite different. Even though both mammals require hay, vegetables and fruit for a balanced diet there is something fundamentally different about how they process their vitamin intake.
Guinea pigs need Vitamin C to ensure they have a healthy diet because just like humans, they are unable to synthesise the vitamin alone, due to a gene deficiency. Vitamin C is found in citric fruits and is necessary for survival. Rabbits, on the other hand, can synthesise this particular vitamin, and if they are given too much then it could make them sick.

Housing them together and allowing them to share a food bowl, may only be meeting the needs of one, which could cause health problems down the line for the other.

This may seem like a bold statement, but it is a possibility and one to be wary of. Our floppy-eared friends are bigger and somewhat stronger than their smaller counterparts. When it comes to food, especially if they are sharing, Peter Rabbit could quite easily push little Mini Guinea out of the way and assert their authority over them. This would result in a tempestuous relationship, especially if your guinea pig is being deprived of food!
Rabbits also love to bounce and hop around as they are very energetic creatures, so playtime could be slightly one-sided and maybe a little rough for your guinea pig who is a little more docile.

Picture this, you’ve got your feet up, you’re comfortable and have a cup of tea on the side and are ready to read the Sunday papers, and all of a sudden your housemate decides to throw a Hawaiian themed party and invite the whole neighbourhood. That’s a little bit like living with a rabbit (from the perspective of a guinea pig!). Despite both being quite sociable little creatures, guineas do like their own space and time to relax, whereas rabbits tend to thrive from attention, either from regular mating or huddling together with their companions, grooming each other. This type of behaviour can be quite stressful for a guinea pig.

They are a different species after all and will not speak the same language. If they cannot communicate with each other then they could suffer from boredom and loneliness. Whereas if there are lots of rabbits and guinea pigs they will feel happier being with their own kind.

There are health risks

Both animals can be affected by Bordetella bronchiseptica which is a bacterial infection that can lead to bronchitis. It is more severe for guinea pigs, whereas rabbits display very few symptoms.
Another potential threat is Pasteurella which is passed through saliva, for example biting. Again, this is less of a threat to rabbits but more dangerous to guinea pigs. If rabbits and guinea pigs are living together, it could cause health risks which could be detrimental to a safe environment.

How to keep them safe if they do live together

Despite the recommendation that rabbits and guinea pigs should not house share, there may be some exceptions. Introducing them to each other when they are kittens and pups means they may grow to love one another and see each other as friends, not foes. Bringing in a new guinea pig into an environment with an older bunny could lead to a hierarchical imbalance.

You might find that they share a bond or have become the best of friends, or you simply can’t house them separately. If that is the case then there are ways you can accommodate their differences.

Create a safe space for your guinea pig

If your guinea pig needs to retreat for a moment or two then having its own space is so important. Omlet has created products that can be extended, interconnected and upgraded providing you with a simple solution when it comes to creating a unique space for your animals. Start with the Eglu Go Guinea Pig hutch which is super easy to assemble and clean. It provides that perfectly safe peaceful space for your guinea pig!

Rather than sharing a food bowl, which we have discovered could be problematic, feed your guinea pig separately from your rabbit. Consider having a different area to feed your rabbit, like in their own enclosure.

Ensure your rabbit is neutered

Nowadays neutering small pets has become a lot safer and far more common, so it would be recommended if you plan to keep multiple rabbits or keep them with guinea pigs. Since we know that rabbits have the urge to mate constantly, this would not only be annoying for your guinea pig but it could also lead to back injuries, considering they are smaller in stature in comparison to a rabbit. By neutering your rabbit they will have less of a desire to mount their hutch-buddy!

Of course, there is no reason why you can’t have rabbits or guinea pigs. It is possible to create separate living areas so that they can sleep apart and have space for themselves (guinea pigs mostly), and an extensive play area (rabbits!) to keep them energised and entertained. To improve on this architectural masterpiece, provide them with a communal playpen, with an interconnecting tunnel system.
It’s not as though they can’t live together, it is possible, though it is not recommended and hopefully this article has provided enough information as to why. If you have experience of rabbits and guinea pigs living in harmony together or perhaps not, then please share your stories in the comments section below. 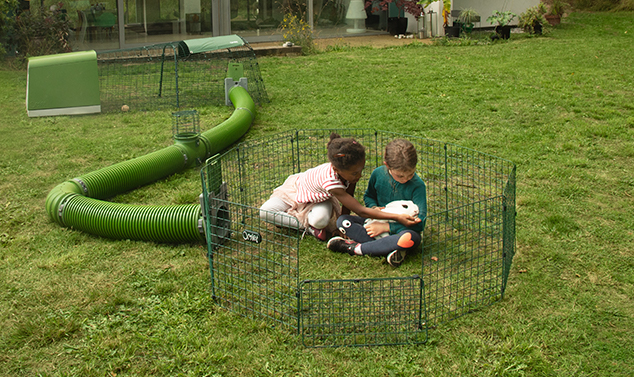