How to Tell a Cockerel From a Hen

Are you considering incubating some of your chicken’s eggs? Or maybe you’ve even already welcomed in some newly-hatched chicks and have been left wondering how exactly you can tell which sex they are?!

Whilst both are chickens, a cockerel, also known as a rooster depending on where you’re from, is a male, and a hen is a female. When it comes to chicks, you may be familiar with the term ‘pullet’, which is the name given to a hen who is from the current year’s breeding. You may find it useful to take a look at the Omlet Chicken Glossary and our blog on how to tell the age of your chickens to find out some further information on this subject.

So, now we have established what both are, we can look into what the physical and behavioural differences are between them. It’s worth noting that most of these differences won’t be immediately identifiable upon hatching, and may slightly vary from breed to breed. However, later in this blog we’ll look more at the weekly development of chicks, and at which stage you will be able to tell a cockerel from a hen.

When we look at determining the sex of a chicken, this is called sexing. One way to do this is by looking at their feathers, their hackle feathers in particular. Hackle feathers are the type of feathers that you’ll find around a chicken’s neck, with the appearance differing between males and females. Something you’ll notice is that male chickens have long, pointy, and thin hackles, which stand up. This is so that they can make themselves appear bigger when they are facing an opponent. Female hackles, on the other hand, are smaller, rounder, and softer.

Do They Have a Cockerel Tail?

Looking at the tail feathers of your birds is another way to distinguish between a male and female chicken.

Next we have sickle feathers, which hens do not have. These are the long, arched feathers which you find sticking out from a rooster’s tail.

Roosters tend to have sturdier, thicker legs, which are actually to serve the purpose of fighting when they need to defend their flock. We’ll look at behavioural differences more later on in the blog.

Spur growth, a part of the leg bone which resembles a horn, could also be another indication of whether you have a rooster or a hen. These are found on the back of chickens’ feet, and whilst not exclusively being a physical attribute of male chickens, these are a lot more common to find on roosters as opposed to hens. The spurs on a male chicken can be inches long and are sharper than those you’d see on a female, should she have any growth at all.

Hens and roosters both have combs and wattles, with the comb being located at the top of a chicken’s head, and the wattles hanging below their chin. The appearance of a chicken’s comb and wattle will differ between breeds, however generally speaking, you can sex a chick by looking at their comb. This is because whilst hens and roosters have red combs, a hen’s comb is not as bright or large as a rooster’s, which is vibrant and will feel waxy to touch.

When it comes to wattles, hens’ are smaller in size than the wattle you’ll see on a rooster. Just as the comb, a rooster’s wattle will also be brighter in colour than a hen’s.

Are They Laying Eggs?

Egg laying is one sure way to know whether you have a male or female chicken! If you notice that your chicken is laying eggs, regardless of whether their other physical or behavioural traits have said otherwise, then your chicken is most definitely a hen!

What are the Behavioural Differences Between a Hen and a Cockerel?

We’ve looked at the physical difference between hens and cockerels, but what are the different behavioural traits that will help you to sex your chickens?

One big difference is vocalisations, or how your chickens communicate via the sounds they make. Cockerels are notorious for their usually very noisy cock-a-doodle-doo crow! They begin to crow at around five months old, or when they have matured, and do so for a number of reasons. This can be to announce their dominant presence, to mark their territory, or even as a mating ritual.

Whilst it’s definitely not impossible for a hen to crow, it’s a lot less common, and should they do so, it’s often a lot quieter as well. If a female chicken does begin to crow, this is usually because they are at top of the pecking order or will occur in the absence of a rooster in the flock when you previously had one.

You may also notice differences in the levels of aggression between cockerels and hens. Unfortunately, bullying amongst chickens is not that uncommon and can happen for a multitude of reasons. Whilst this behaviour is not exclusive to male chickens, roosters are said to always have an eye out for danger, ready to fight to protect their flock. Usually being top of the pecking order, roosters like to assert their dominance by fighting with other roosters to try and show who’s boss! You can read more about aggressive behaviour with cockerels in our previous post. As with the other physical differences pointed out, how aggressive your chickens are can also depend on their breed. Certain breeds such as the Asil, Modern Game, and Old English Game for example, all rank top of the list of some of the least friendly chicken breeds!

From What Age Can You Tell The Difference Between a Hen and a Cockerel? 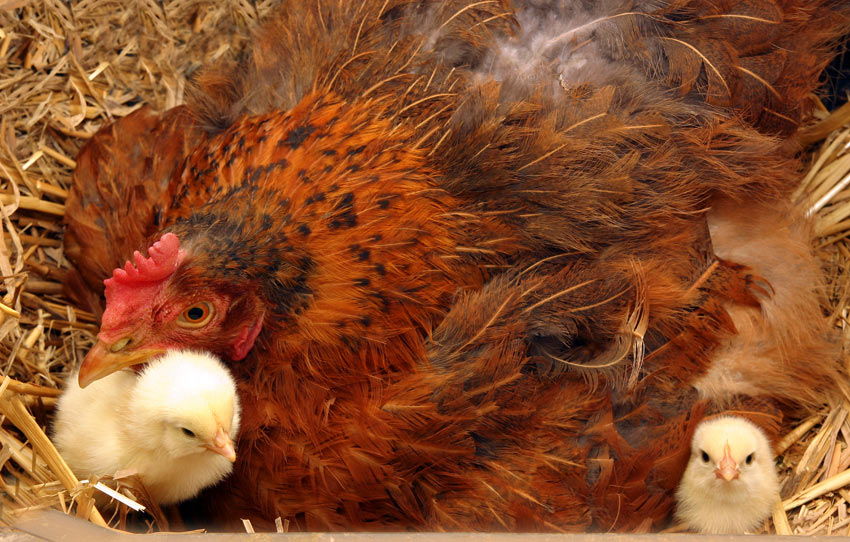 We have now established what the main physical and behavioural differences are between the two, but at which age can we start to tell a cockerel from a hen?

For the vast majority of chicken breeds, you will not able to tell their sex from when they have been hatched or even during the first week. The exception to this rule is with auto-sex breeds, who can be sexed just by looking at their colouring within their very first few days. An example of this is the Purebred Cuckoo Maran breed, whereby male chicks usually are an overall lighter colour than females and have a larger and paler spot on their heads than females do.

Similarly, sex links are also an exception. Sex links however, are crossbred chickens as opposed to pure bred auto-sex breeds. In this circumstance, a breeder will mix one specific chicken breed with another to create chicks that will hatch as different colours, based on their sex. This again, will mean that it is possible to be able to tell a rooster from a hen at a very early point i.e. from when they hatch. An example of this is the Red Sex Link, a cross between the Rhode Island Red male with either a White Plymouth Rock, Delaware, Rhode Island White, or Silver Laced Wyandotte female, which produce red hens and white roosters.

Between weeks 5 and 8 in particular, is when chicks start to develop features that will make it easier for you to determine their sex. At this point you’ll notice changes in their physical appearance, such as with their combs. As we mentioned, male chickens generally have a redder comb, and it is at this stage between weeks 5 and 8 where this will begin to show. This being said, at this stage this is not always an entirely accurate method of sexing.

Another physical difference between these weeks is the legs of male chicks will likely start looking chunkier than females’.

When looking at rooster vs hen behaviour between these weeks, you may also notice that male chicks will begin ‘strutting’ i.e. standing up straight, walking in an exaggerated manner, and sticking their chest out.

At this point, your chicks will be well into their ‘teenage’ stage, where they’ll be going through some big developmental changes. If your chicks have now reached 12 weeks, they’ll also be ready to move into their Eglu Go coop. It will be helpful to go over the Omlet guide on common mistakes that are often made when it comes to raising chicks of this age.

In regard to the differences between male and female chicks during these pivotal weeks, it is around week 12 when the pointy hackle feathers (adult neck feathers) will really begin to stand out on roosters. The same goes for the growth of sickle feathers for male chicks, which even at full maturity, hens do not have.

Whilst crowing can begin at a slightly earlier stage, it is usually around the 12 week mark as well when a chicken first does so. Crowing is a behaviour that is generally more associated with male chickens, however as pointed out, this can occasionally happen for hens too.

Additionally, you may notice your female chick beginning to squat. Although most hens will not begin laying until the next coming weeks, this behaviour indicates that she could be getting ready to lay soon, but not just yet!

Can Hens Turn Into Cockerels? 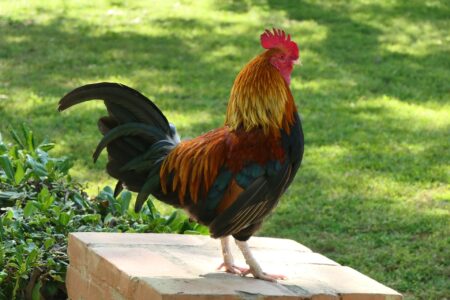 As bizarre as this question may sound, there have been a number of documented cases of chicken keepers claiming that their chickens have changed sex! From the offset, the answer to this question is no – hens most definitely cannot genetically turn into cockerels, nor can cockerels turn into hens.

However, what can occur in very rare circumstances, is when a hen takes on the characteristics of a cockerel as a result of complications with her ovaries. Hens are born with two ovaries – the left organ is responsible for producing eggs and estrogen, whilst the right, on the other hand, becomes dormant when a chick is hatched. Should the female chicken encounter a medical issue such as an ovarian cyst, testosterone levels will begin to rise, and the left ovary can shrink, which causes the development of an avo-testis. At this point, your hen will stop laying eggs and can even take on the appearance of a male chicken such as a more established comb and wattle!

So, now you know all about the differences between a cockerel and a hen! If you’re new to chicken keeping altogether, or you’re considering incubating some of your chicken’s eggs take a look at the Incubation and rearing equipment. 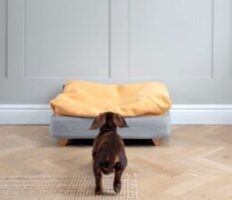 What Is the Best Bed for an Anxious Dog? 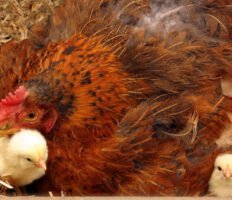 How to Tell a Cockerel From a Hen 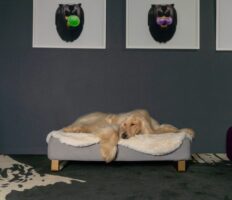 Did You Know How Dirty Your Dog’s Bed Is?