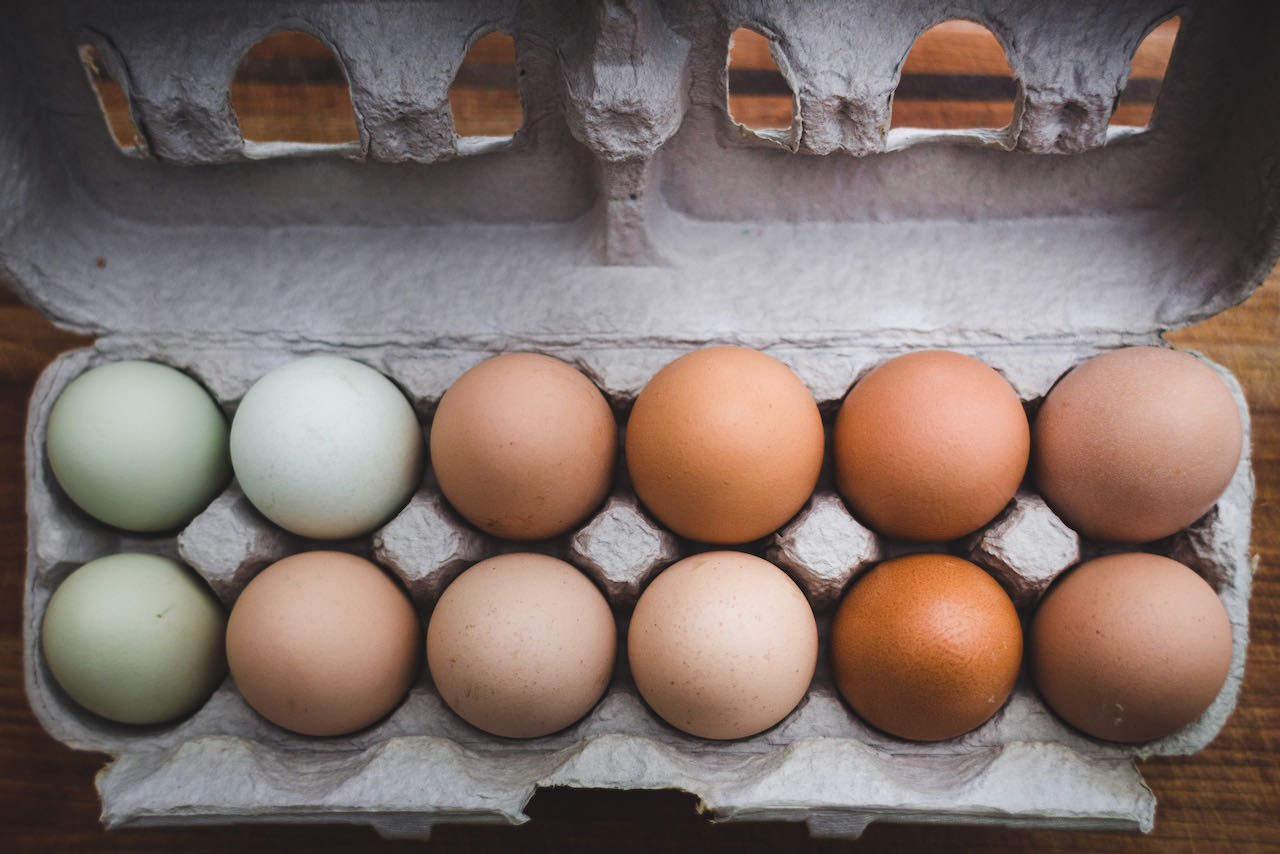 Chickens sometimes lay eggs that look nothing like a standard supermarket egg. Some are huge, some are tiny, some are ball-shaped, some are pointy, and some are soft-shelled. There are various reasons for these oddities.

Each hen will have her own ‘quirks’ in terms of egg size and colour. Although most chicken breeds lay light brown eggs, some have eggs with pigmented shells. A hen will produce eggs of the same colour throughout her laying years. The palette ranges from deep browns to light blues and pastel greens, with speckling adding another dimension of prettiness.

Odd shapes and sizes are something quite different, though. They are quirks rather than breed-specific traits.

Why are chicken eggs sometimes bigger or smaller than usual?

A huge egg contains two yolks. In these cases, the hen has doubled up on her usual daily production and has had to produce a giant egg to accommodate the extra mass. These eggs usually have smaller-than-usual yolks, but they look very eye-catching in the poaching or frying pan!

Why are chicken eggs sometimes misshapen?

An oddly-shaped egg can be produced for various reasons. It often takes young hens an egg or two before they settle into their regular pattern. Stress in the chicken coop can lead to misshapen eggs too. This is usually due to a hen having the urge to lay but finding her space in the laying box occupied by another bird.

Misshapen eggs can be elongated, or they may have a thin, pointy end. Sometimes they are rough-looking, with craggy rather than smooth surfaces, or with thicker bands of shell running across their middles. In all these cases, the egg inside is unaffected and is perfectly safe to eat.

A ball-shaped egg is usually a sign of slight calcium deficiency. The round shape requires less calcium than a normal oval egg.

Infectious bronchitis can lead to misshapen eggs. An infected hen will stop producing eggs for a few days or will only lay intermittently. The eggs she lays will have thin, wrinkled or rough-shelled eggs, and the white of the egg will be watery. It is also common for the affected eggs to have lighter-coloured shells than usual. The condition is rare, and chickens can be vaccinated against it.

Laryngotracheitis is another illness linked to egg abnormalities, and this, too, can be prevented through vaccination. Any ailment can cause a hen to become stressed, so, in theory, any illness can result in misshapen eggs.

Why do chickens lay freckled eggs?

Some breeds always lay speckled eggs. However, if a hen that typically produces plain eggs lays speckled ones, there are various possible causes. She may have been shocked or stressed in some way while the egg was forming, or she may have developed a quirk in the pigment-producing part of her egg-laying system.

Freckling is often the result of excess calcium production, sometimes associated with the ‘end of season’ laying at the beginning of winter. On some eggs, there is a marbled pattern rather than an area of freckles.

The speckling is usually smooth, but it sometimes manifests as raised blotches of excess calcium. These can be spots or wormlike strands, and they often occur as single spots on an otherwise standard egg. This may be linked to dehydration, so make sure your hens have enough water, and that a timid hen isn’t being bullied away from it all the time.

Why do chicken eggshells sometimes have a white ring?

Viewed from the side, an eggshell with this peculiar oddity has a thick white ring, looking uncannily like an x-ray of the egg that lies beneath. It is usually caused by an interruption in the formation of the eggshell, caused by stress or by a second egg entering the internal production line.

The second egg produced in this process will usually have a flattened side, as it has bumped into the first egg during the early stages of shell formation and has been ‘squashed’ into an odd, flattened shape.

Why are chicken eggs sometimes wrinkled?

A wrinkly eggshell can be a sign of stress or illness, but is usually a hereditary condition. Some older hens begin to lay wrinkly eggs too. The wrinkles are often deep grooves, giving a very misshapen egg and making this perhaps the weirdest of all the egg oddities.

The wrinkles sometimes look like a series of cracks in the shell. This results from an egg cracking during calcium formation, and the cracks are the chicken’s repairs, laying calcium over the cracks. Once again, the underlying cause is usually stress or illness, although sometimes it is simply the result of a second egg ‘crashing into’ the first due to an over-productive system.

Why do some chicken eggs have soft shells?

A soft shell is a sign of calcium deficiency or a lack of vitamin D. Low calcium can be prevented by making sure the hens have a high quality feed and don’t gorge on kitchen scraps (which may fill them up so much that they don’t bother eating the layers pellets). Low vitamin D can be prevented by sunlight – not always easy in the colder months of the year!

Other possible causes include heat stress, too much salt or too much spinach. When feeding chickens kitchen scraps, avoid giving them anything that is salted.

The extreme version of the soft-shelled egg is the egg with no shell at all. If a hen lays a shell-less egg, it should be cleaned up at once, as it will soon become rotten in the warm coop.

Weird eggs are usually one-offs, and they are nothing to worry about. If a hen lays an odd egg two days in a row, it is worth looking at possible underlying causes. Diet and stress are the chief culprits.

In terms of culinary uses, don’t worry. With the exception of soft-shelled and shell-less eggs, all these egg oddities are safe to eat. 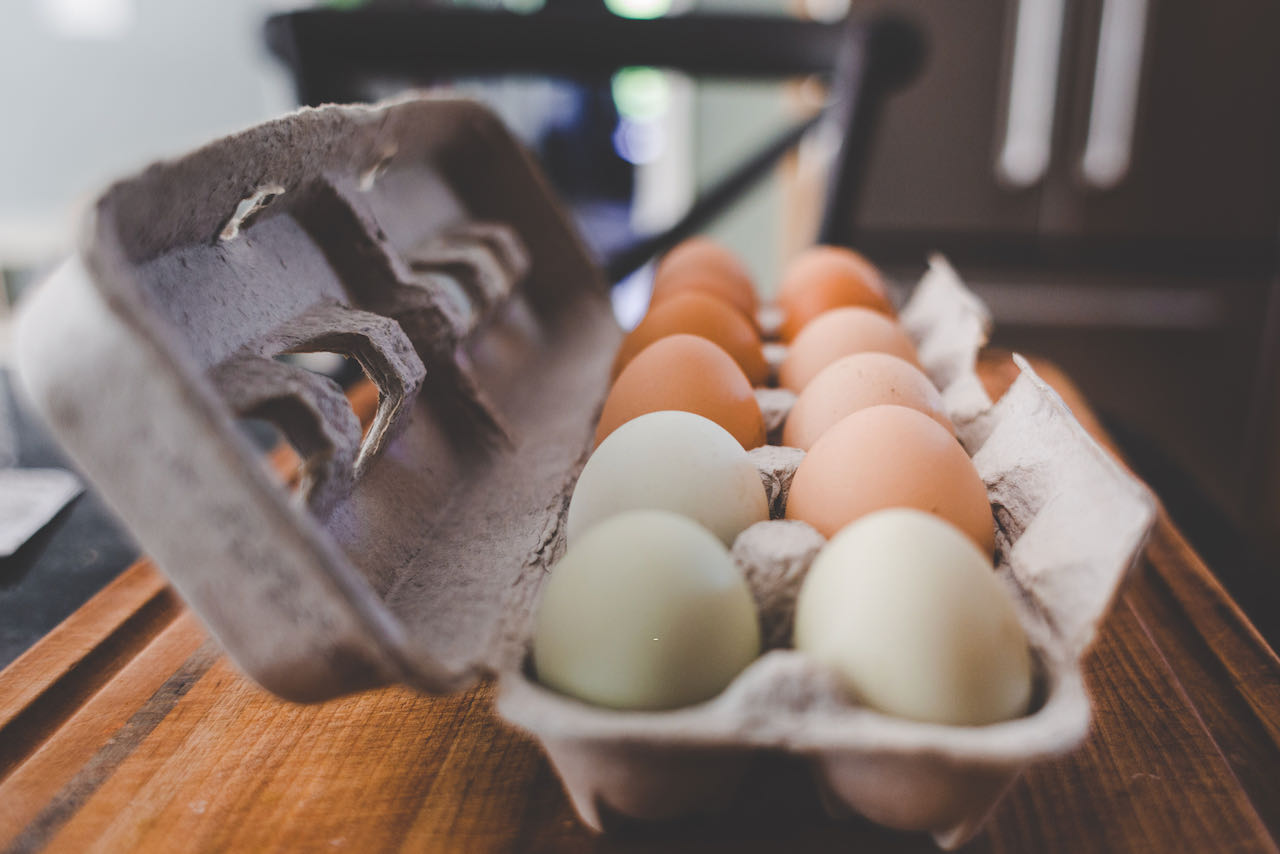