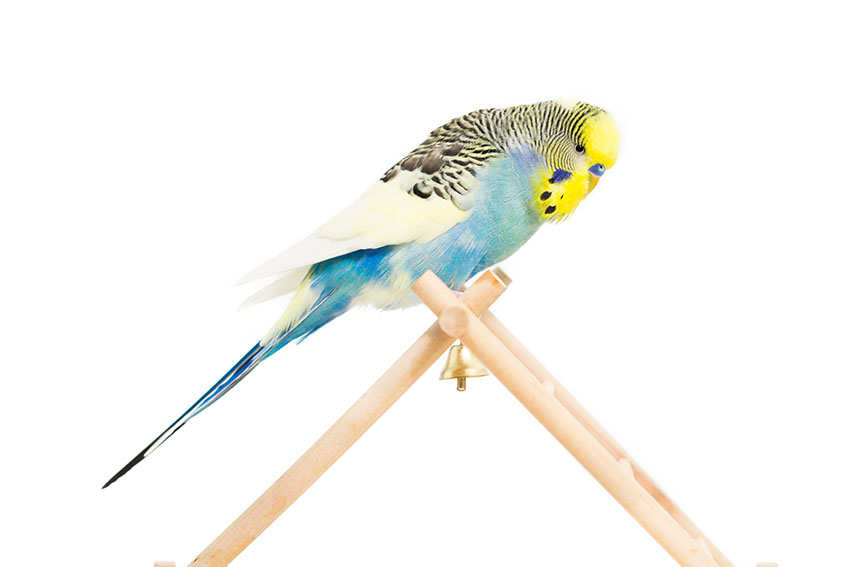 The starting point for all budgie tricks is trust, and the key to success is treats! Once a budgie has been hand-tamed and is happy to perch on your finger outside the cage, you can take it a step further and introduce some fun challenges. Make sure you have a sprig of millet or your pet’s favourite vegetable snack handy!

For this, you need a small raised platform, with a ladder leading on one side and a slide on the other.

The budgie will soon realise that the slide is the key to the treat. Once the bird is on the slide, say ‘Down the snake!’ You can then extend the ladder and the ‘snake’, if you wish.

If you put a table tennis ball in your budgie’s cage, the bird will soon be playing with it, ‘dribbling’ the ball with its beak. Outside the cage, this can be turned into a human-versus-budgie football game. Gently roll the ball towards the budgie, and the bird will instinctively ‘save’ the ball. Include a goal mouth, and your budgie is transformed into a goalkeeper.

Set up another goal mouth a metre away from the budgie, and see if the budgie manages to score a goal as it taps the ball forward with its beak. Once the ball is between the goalposts, say something like ‘Goal!’, and offer a treat. The bird will soon learn to hone its beak-dribbling skills in order to score those treats!

The aim here is to get your budgie to negotiate a short tunnel. It won’t be tunnelling its way to freedom, though, just to a tasty treat!

To begin with, use a piece of cardboard with a large hole cut into it, or a large plastic ring. Call the budgie, offering a treat on the other side of the hole. As the bird hops through, speak your chosen command words – something like ‘Let’s tunnel!’ Once the trick is going well, swap the hole for small sections of plastic or cardboard pipe, with a narrower hole/tunnel as time passes. Eventually, you will be able to call your budgie to make his Great Escape through something with the thickness and length of a kitchen towel tube.

This one takes a little time to get right, but once again the budgie’s intelligence wins through in the end. The goal here is to teach your bird to pick up an object, bring it to you, and drop it into your hand.

To begin with, get the budgie to perch on your hand, and offer a shiny object such as a button or paperclip. When the budgie takes it in its beak, say ‘Fetch!’ When it drops the object, say ‘Drop it!’, and if it lands in your hand, offer a treat.

Once this has been mastered, place the object away from your hand, and say ‘Fetch!’ when the budgie picks it up. Bring your hand close, ready to catch the object when it falls. Over time, this will develop into a routine in which the budgie picks up an object, runs back with it, and places it in your hand for a treat.

The thing that all these tricks have in common is that the budgie will love performing them. If they don’t want to take part, they won’t, simple as that. This means there’s no pressure, no forcing the issue. It’s just fun all the way, for budgie and owner alike. Trust and treats – that’s the key!

« What’s Wrong With My Chicken?
Use Your Girls’ Eggs for This Gorgeous Homemade Pasta »